Eating Smoke — a question and answer with the author, Chris Thrall – Part 1/5

Tom Carter, author of “CHINA: Portrait of a People”, catches up with Chris Thrall to discuss his new book “Eating Smoke“, a memoir about Thrall’s descent into drug psychosis in Hong Kong’s triad heartland.

In the fall of 2009, whilst traveling in India to create my next photography book, I was contacted via email by a British writer who had read Down and out in Hong Kong, one of my online travel articles, which described this poor, dusty backpacker’s real-time impressions of Asia’s wealthiest city.

Chris Thrall said he connected with my article’s conclusion that, in spite of my western heritage, and due to my personal circumstances, I ultimately had more in common with the destitute third-world inhabitants of the Chungking Mansions, the infamous immigrant ghetto of Kowloon, than I did with the rich white bankers et al who comprise the other half of Hong Kong’s multinational population. 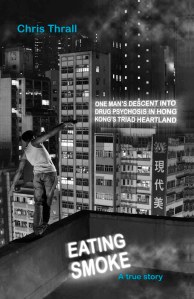 Chris went on to explain that he was writing a book about his own experiences living in Hong Kong, which was dramatically different from mine or any other expatriate I ever knew, and that he once worked for the 14K, the world’s largest Chinese crime family.

Attached to his email was the first chapter of his memoir, a gripping opening salvo that finds the narrator hiding from pursuing henchmen on a roof top—alongside two corpses, a disemboweled mother and child.

As a voracious reader, I know a bestseller when I see it.  I immediately forwarded Chris’s manuscript to my publisher in Hong Kong, Pete Spurrier, who runs the iconic Blacksmith Books, which specializes in Asian-themed literature.

Pete likewise was knocked off his feet by Chris’s incredible story; the next I heard, Chris was a fellow Blacksmith label mate with a book deal.

Chris Thrall was born in the UK. At eighteen, he joined the Royal Marine Commandos. Following active service in the Northern Ireland Conflict and training in Arctic warfare and survival, he earned his parachutist’s ‘wings’ and went on to serve as part of a high-security detachment onboard an aircraft carrier. In 1995, Chris moved to Hong Kong to oversee the Asia-Pacific expansion of a successful network-marketing operation he’d built, part-time, while serving in the Forces. Less than a year later, he was homeless, hooked on crystal methamphetamine and working for the 14K, Hong Kong’s largest triad crime family, as a doorman in Wanchai’s infamous red-light district.

“Eating Smoke“, a humorous yet deeply moving first book, is his account of what happened.

Continued on October 17, 2011 in Eating Smoke – Part 2, or if you have time and do not want to wait for the five-part series to finish posting daily, click View as Single Page.

Travel photographer Tom Carter is the author of CHINA: Portrait of a People, a 600-page book of photography from the 33 provinces of China, which may be found on Amazon.com.