In the Western media, I often read or hear about sex slaves and prostitution in China—Yellow Journalism at its worst.

To put this in perspective, data shows about 100,000 prostitutes are arrested each year in America, and the National Task Force on Prostitution suggests there are at least a million people in the United States who have worked as prostitutes or about 1% of American women. Some of these American prostitutes are sex slaves—something often denied while pointing fingers across the Pacific at China.

What we should hear about from the Western media (BUT DON’T) are stories about women like Dr. Zhang Yanxuan, an innovative scientist, who started a successful business in China to destroy mites that eat food crops. With twenty-seven years of scientific knowledge and government support, she raises predatory mites, a biologically safe method to kill the mites that eat crops. Her products are also being exported to other countries. 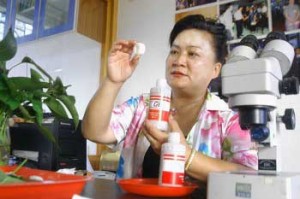 This is important, since China has become the world’s leading pesticide user allowing chemical companies to make hefty profits while poisoning the environment and the people. However, Dr. Yanxuan’s predatory mites may replace pesticides as China’s government is becoming greener in their thinking.