The fifth generation of Communist leadership in China will take charge in 2012, as the fourth generation steps down.  Retirement from public office is mandatory at 67.

Who are these people? There are two factions (recognized by the Western media) competing for leadership of the country.

One faction is the Gang of Princelings whose parents were powerful members of the Communist Party. The other faction comes from those that climbed the ranks from China’s Youth League. This year’s session of the National People’s Congress marks the unofficial start of the campaign season for 2012 when most of the current leadership will retire.

One princiling has been in the spotlight recently. He has achieved celebrity status in China because he was successful fighting organized crime in Chongqing, a city with a population that is more than thirty million.  His name is Bo Xilai, one of the princelings, and his father was one of China’s eight Communist Immortals. 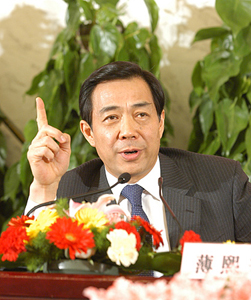 In China, family history is important and always has been. The Chinese look at the history of the family, the father, the mother and believe that will show them who the child will be and if that man or woman can be trusted.