In 1999, we visited The Great Wall at Badaling.  We returned to visit a different section in 2008. The second time, I carried a digital camera (a few of the photos appear with this post).

Smithsonian Magazine reported, “Few cultural landmarks symbolize the sweep of a nation’s history more powerfully than The Great Wall of China. Constructed by a succession of imperial dynasties over 2,000 years, the network of barriers, towers and fortifications expanded over the centuries, defining and defending the outer limits of Chinese civilization. At the height of its importance during the Ming Dynasty (1368-1644), The Great Wall is believed to have extended some 4,000 miles, the distance from New York to Milan. 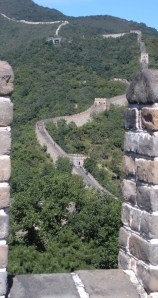 The sections of The Great Wall we visited are about an hour out of Beijing. The most popular site is at Badaling.  I think the second choice, Mutianyu, is more dramatic. This portion of The Great Wall runs along the ridge of a mountain range. Badaling, meanwhile, starts in a mountain pass fortress.

The best way to reach The Great Wall is by taxi or bus. After you get there, you’ll discover the usual tourist shops. Since I enjoy haggling, I spent time shopping.

At Badaling, there were camels and horses you could pay a fee to sit on while having your photo taken.

Once you reach Mutianyu, you have a choice—take a few hours to climb the mountainside  to The Great Wall or ride a ski lift to the top in fifteen minutes.

China’s Great Wall was not built by one emperor. It was built in segments by the kings of several nations over a period of centuries. Those walls were eventually linked together by China’s first emperor in 221 BC. 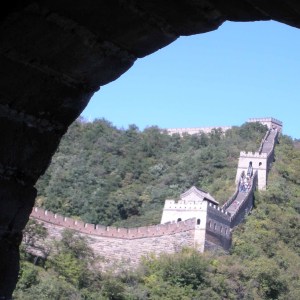 When you are on The Wall, if you get thirsty or yearn for a snack, there are vendors that carried their goods up the mountain often using horses.

Once you are ready to leave The Great Wall at Mutianyu, the toboggan ride is worth the price.( see the embedded video with this post)

Like so much about China, The Great Wall is also the victim of myths that are not always true. Did you know that the history of the Great Wall of China started when fortifications built by various states during the Spring and Autumn (771 – 476 BC) and Warring States (475 – 221 BC) periods were connected by the first emperor of China, Qin Shi Huangdi? But the best-known and best-preserved section of The Great Wall was built in the 14th through 17th centuries A.D., during the Ming Dynasty—more than two thousand years later.

If you want to know more about The Great Wall, I suggest reading Peter Hessler’s Country Driving. The first part of his book is about the months he spent driving the length of The Great Wall all the way to Tibet.

If you watch the video you will discover that before there was one wall, there were many—all built by different kingdoms before China was unified in 221 BC.

Although I enjoyed reading Country Driving, I think that the hundred and twenty-two pages that focus on The Great Wall are the best part.

Before reading Hessler’s book, I wrongly believed, as so many do, that The Great Wall was a failure as a defense against invaders. However, Hessler proves that myth wrong. For the most part, the wall did keep marauders out.

In fact, on page 116 of the paperback, Hessler quotes David Spindler who found evidence that the Ming Great Wall actually worked as a defensive structure.

The Great Wall failed when the unified Mongols invaded China in the 13th century but it didn’t happen overnight. It took sixty years for the Mongols to conquer all of China.

Before Genghis Khan unified the Mongols, there was no unified Mongolia—only nomadic tribes that fought amongst each other and raided into China whenever one or more tribes decided on a whim to go raiding. That is if they could fight their way past The Great Wall guarding China’s heartland.

Hessler points out that no archeologists or historians have studied the history of The Great Wall but there are amateurs that have, both Western and Chinese, and these Great Wall amateur (experts) have discovered original documents written by Ming Dynasty military officers and troops detailing the defense of the wall against nomads intent on raiding into China to loot, rape and steal. According to this information, the wall succeeded more than it failed.