If you haven’t heard of it, Sexy Beijing (produced by Goldmines Film and Video Production since 2006) is an Internet TV station run by an in-house production team.

Sexy Beijing says “Our shows have also aired on NBC in Los Angeles, Hunan TV, China Educational TV, and many other stations around China as well as conferences around the world.”

I dare all Westerners that believe the Chinese are depressed and heavily censored to watch Sexy Beijing regularly to learn the truth of China.

Any censorship that exists in the media in China focuses on only a few topics such as the Dalai Lama and Tibetan or Islamic separatists that are considered the same as Islamic terrorists are to the United States.

In this episode of Sexy Beijing, Su Fei tries to please her mother and go for one of her own kind.

Sue Fei, the Jewish host of this segment, says, “Most people are surprised to find out just how multi-cultural Beijing is. And when it comes to a husband search, I could just as easily be bringing home an African or Muslim suitor to meet my Jewish mother as I could a Chinese one.”

Sue Fei then heads for the new Chabad Jewish community center in Beijing to find out what it would be like to become an Orthodox Jew.

In 1967, I was stationed at Camp Pendleton, California. Between June 5 to 10, six months after I returned from Vietnam, Israel fought the Six-Day War defeating four Islamic nations that had twice the troops Israel had, three times the combat aircraft and three times as many tanks. 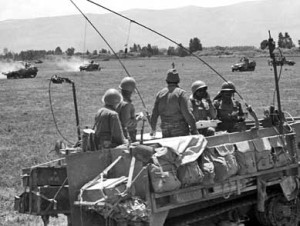 Israel and Syria During the Six Day War

I remember saying, “We should let them fight the Vietnam War for us.  At least Israel’s leaders know how to fight.”

The Jews and the Chinese have four things in common—loyalty to family, a high respect for education, a willingness to work long hours for low pay, and a canny acumen for business. Because of these similarities, the Chinese have even been called the Jews of Asia.

The Jews have a long history with China. In China: A New Promised Land, by R. E. Prindle, an interview with David Grossman, Israel’s leading novelist talks about the Jews moving to China.

When a father goes to work in China, he works for his family—not himself. After the children grow up, they must care for their parents—not the other way around like in America.  In America, many parents tell their children to do whatever they want and be anything they want. Most children follow that advice even if it means getting a degree to become an artist or skipping college to chase dreams of acting, singing or sports fame while attending parties or visiting theme parks like Disneyland because mom and dad said, “We want you to be happy—to have fun.”

It’s different for many Jews and Chinese. Working hard and earning an education are important to both cultures.  A close friend of mine and his wife, both Jewish, took out a loan on their home so their son could become a doctor and their daughter a lawyer. They bought a condominium near the university their children attended as a place to live. Both the mother and father were teachers, who did not earn much, which shows that Jewish parents, like the Chinese, are willing to sacrifice for their children in ways many American parents would find unacceptable in the age of credit cards and instant gratification.

This willingness to sacrifice for the family and nation may have been the reason the Jews won the Six-Day War against overwhelming odds. Although the Chinese have the same values and are willing to make the same sacrifices for family, they did not know how to fight like the Jews—something the surviving Jews must have learned due to Nazi atrocities.

After Mao won China, he caused much suffering with the Great Leap Forward and the Cultural Revolution where the goal may have been to root out the weaknesses that caused China to become a victim to Western Imperialism in the 19th century and Japan during World War II.

I wonder if the Chinese learned the lessons Mao taught them through suffering similar to what the Jews experienced from Hitler.  I wonder if China will fight like Israel if threatened again. Before Mao, China was a country of poets and artists who painted watercolors on rice paper.  Even Mao and his generals wrote poems. I do not believe the Chinese are a military threat to anyone who does not threaten them.

Like Israel, China will only respond if they feel they are going to be attacked, and if Mao left them ready to defend themselves against aggressors, then the horrors that caused so much suffering and death during the 27 years he ruled China might have been worth the sacrifice for the survival of this family focused culture.

Most America families were like that once before the industrial revolution and the self-esteem movement made the individual more important than the family. Back then, 90% of the population lived on small family farms near towns and hamlets instead of bulging cities dominated by corporate cultures and sexy advertisements. Today, most family roots in the United States do not run deep—not like the Chinese and Jews.

Discover The First of all Virtues

Do not stereotype. The meaning of face may vary between the Chinese.  It depends on the balance between Confucianism and Daoism along with factors like Buddhism or belief in the Christian, Islamic or Jewish God.

Face is why most Chinese mothers ride their children hard to earn good grades in school while telling everyone they know that their kid is stupid and lazy and has no chance to succeed. Chinese mothers may often tell their children the same thing. However, if the child is accepted to a prestigious university, that Chinese mother has now earned bragging rights and gained much face for the great job she did as a mother.

To get a better idea, I recommend reading Amy Tan‘s “Joy Luck Club” or watching the movie.

We had a house full of my wife’s Chinese friends over for dinner. After eating, the children gathered in our downstairs TV room to watch a movie.  They picked “The Joy Luck Club”, and during one scene, when the Chinese mother was acting very Chinese, all the children looked at each other, nodded a ‘yes’ and laughed ironically. Since my wife is Chinese, I knew why they reacted that way. They all had Chinese mothers.

One of the Five Great Relationships that Confucius taught was the one between father and son. Nothing has changed. In addition, because of the relationship between husband and wife, the wife is expected to support the husband. It is the husband and wife’s responsibility to see that a son or daughter grows up to be like the gentleman that Confucius described. To do anything less would be a ‘loss of face’, because the child’s failure or success is a walking advertisement to everyone that the parents did not do their job.

Because of Confucius, most people in China have mutual obligations and responsibilities to each other. If you watched the opening Olympic ceremony in Beijing on TV, you may remember the little boy that risked his life after the big earthquake in Sichuan province. He said it was his duty. According to Confucius, he was right. Buddhism also plays an important part in everyday life in China.

These expectations go back more than two thousand years—well before Constantine made Christianity the moral and ethical foundation for the Roman Empire and Western civilization. Does that mean that everyone in China follows what Confucius taught? Do all Christians, Muslims or Jews follow what their God, spiritual teachers and prophets taught? The answer is no, but the foundations of these cultures are still built on those teachings.

Lloyd Lofthouse is the author of the award winning novels My Splendid Concubine and Our Hart.