My parents generation is the one John Steinbeck wrote of in Cannery Row. One review says, “The novel depicts the characters as survivors, and being a survivor is essentially what life is all about.” The same theme permeates Steinbeck’s The Grapes of Wrath and Of Mice
and Men.

However, today, many Americans have forgotten the sacrifice it takes to survive and expects government to bail them out.

My father, at 14, was mucking out horse stalls at Santa Anita Race Track in Arcadia, California—the sort of work immigrants do today.

It started in America and swept around the globe!

My mother worked in a laundry and at home, she baked and decorated cakes for special occasions that she sold to neighbors, co-workers, friends and family.

My older brother worked most of his life until the day he died at 64 in 1999 working the jobs that immigrants do.  When he didn’t have work, he spent his days going to dumpsters looking for cardboard and searching the roadsides for empty soda cans and beer bottles to sell at the local recycling place.

Richard, my brother, “once” told me shortly before his death that he was proud he never collected a welfare check or depended on government handouts. The Latinos he worked with called him The Horse, “El Caballo”, due to his strength.

When I was fifteen, I went to school during the day and worked nights and weekends [30 hours a week] washing dishes in a coffee shop often until 11:00 PM only to be at high school the next day by 8 AM.

After a few years in the US Marines and a tour in Vietnam, I washed cars, swept floors and then bagged groceries in a super market while I attended college on the GI Bill.

One summer job before my fourth year of college had me cleaning empty 50,000 gallon stainless-steel tanks at the Gallo Winery in Modesto, California. It was a dangerous job cleaning out the tanks where the wine was fermented, and I witnessed fellow workers injured and rushed to the hospital.

However, the generation that won World War II and made America strong and powerful is mostly gone or retired. Today, the work ethic in America has changed.  The reason it changed has a lot to do with the way children have been raised since the 1960s by parents obsessed with their children’s self-esteem and happiness, while making sure these children never face a boring day and blaming teachers for the child’s bad grades instead of holding the child responsible.

Unfilled jobs due to skills gap

Since 1960, the US has not won a single war.  After more than a decade and about 50,000 dead, we lost in Vietnam. Today, after another decade at war, we are still fighting in Iraq and Afghanistan with no victory in sight.

It’s as if today’s younger generation is incapable of making the sacrifices the Great Depression (1929 – 1942) generation did when 25% of all workers were completely out of work. Some people starved and many lost farms and homes.

However, I’ve met Chinese immigrants willing to do the same work for the same low pay that Latino immigrants from south of the border do and often charge less while saving money to put their children through college.  It’s called sacrifice.

Continued on December 11, 2011 in America’s Lost Work Ethic and the End of its global Exceptionalism – Part 3 or return to Part 1

End of Cheap from China

I find it interesting and amusing to read this obsession in the West about China’s labor practices.  Most of what I read in the media and comments to Blog posts have a superior tone as if these people come from a culture that is paradigm of virtue.

No one in the West has earned a seat to sainthood.  In an Associated Press piece by Elaine Kurtenbach, we see Western corporate greed dripping dollar signs from hungry vampire fangs in these quotes about China, “Many companies are striving to stay profitable by shifting factories to cheaper areas farther inland or to other developing countries, and a few are even resuming production in the West.… I have 15 major clients. My job is to give the best advice I can give. I tell it like it is. I tell them, put your helmet on, it’s going to get ugly,” said Goodwin…”

From BindApple.com comes this statement as if no one else in the world works these hours, “Foxconn and Inventec are two powerful brands that not many of you heard of. When Apple signed a partnership with these manufacturers, the average worker, lived and worked in the factory, doing more than 60 hours of work in a week.”

America and most Western nations are not paradigms of virtue. Labor in the West didn’t get where it is today without a struggle. All one has to do is look at history to discover what it took to earn more for less hours and be treated with “some” respect in the workplace.

If you spend time at the AFL-CIA’s Labor History Timeline in America, you will discover that in 1791, the first labor strike in the building trades took place in Philadelphia demanding a 10-hour workday bill of rights. In 1835, there was a general strike for a 10-hour workday in the same city.

When there was a national uprising of railroad workers in 1877, ten Irish coal miners were hanged in Pennsylvania and later nine more were hanged. Then in 1914, there was the Ludlow Massacre of 13 women and children and 7 men in a Colorado coal miners’ strike. In 1934, during the Great Depression, there was an upsurge in strikes, including a national textile strike, which failed.

Click on the Child Labor Public Education Project and you will learn that “Forms of child labor, including indentured servitude and child slavery, have existed throughout American history.” In fact, “(American) factory owners viewed them (children) as more manageable, cheaper, and less likely to strike.”

This situation in the US didn’t change until, “Child labor began to decline as the labor and reform movements grew and labor standards in general began improving, increasing the political power of working people and other social reformers to demand legislation regulating child labor.” Even then, it wasn’t until 1938 that child labor laws were enacted to protect America’s children from exploitation.

So, if you are one of those paradigms of virtue who feels the need to criticize what is going on in China today, consider America’s labor history before you open your mouth or finger dance your computer keyboard.

It took more than two-hundred years for the US to reach the place it is today with a standard 40-hour workweek with benefits and overtime pay for many workers, while removing child labor from the workplace.

China didn’t start until 1950, when Mao created laws that made women equal to men. Progress stopped during Mao’s Great Leap Forward and his Cultural Revolution, which went on for almost thirty years.

Since 1980, China has had about thirty years to evolve, while in America the income gap between the rich and poor widens as if the US is taking backward steps while union membership shrinks.

In fact, Chinese manufactures may be building plants in the US to take advantage of cheaper labor. After all, Japanese companies like Toyota and Honda have already done that.

See The Reasons Why China is Studying Singapore or Where Did All that Pollution Come From?

America and China both have a generation that matured during tough times.

I wonder if the American generation that survived the Dust Bowl of the 1930s, the Great Depression and won World War II, would riot like these Greek mobs.

My parents were from the Great Depression generation. At fourteen, my dad went into the mountains near Los Angeles to fill fifty-pound bags with oak leafs for a nursery, and he mucked out horse stalls at Santa Anita. At fourteen, my mom was a server in a coffee shop in Eugene, Oregon. She supported her mother and younger sister from the tips. Mom and dad weren’t perfect. They had vices. 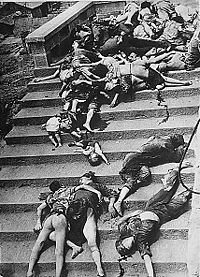 What happened to America after World War II is happening in China today. The Chinese who are turning China into a super power are the ones who fought the Japanese during World War II, who won the revolution to free China from Chiang Kai-shek’s Kuomintang dictatorship and threw off the yoke of Western Imperial colonialism. They also survived the deprivations and repressions of the Cultural Revolution under Mao.

Hardships breed survivors, who do not riot when economies collapse. They work for less at any job. They eat yams, rice and soybeans instead of ice cream, candy, French fries, drinking sodas or Starbuck’s lattes.

People from the great generations did without TVs and iPods. They survived without phones and the Internet. They saved and paid with cash instead of using credit cards.