When I attended the 6th Asian Heritage Street Celebration in San Francisco, I stopped at a booth for Shen Yun Performing Arts staffed with attractive, college age girls. My wife loves dance, and I thought she might be interested. I asked if this dance troop was part of a local college or university. The girl who handed me the brochure said yes. She lied to me. 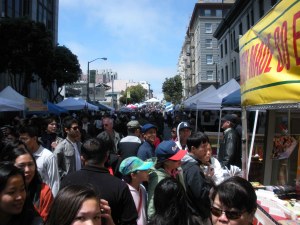 That evening, when I arrived home, I handed the brochure to my wife, who said, “That is Falun Gong.” I’ve written about The Falun Gong and Costco, about A Visit from the Falun Gong, and the more I learn about this group, the more sinister they become.

Turning to the Internet and using Google, I learned that New Tang Dynasty Television, Shen Yun Performing Arts and The Epoch Times all appear to be part of Falun Gong. I also discovered that Falun Gong must buy lots of Internet AD words so Google searches lead to one of the gears in the Falun Gong machine.  In fact, I had trouble finding anything but Falun Gong propaganda and had to keep altering my search terms to get beyond the Falun Gong firewall.

In time, I discovered a piece published in the Buffalo News saying, “the promoters and creators of “Shen Yun,” who have picked up a reputation for misrepresentation and deception over the years, have adopted the questionable propagandist tactics of the very government they criticize in their productions.”

Digging further, the New York Times reported, “China’s decision to ban Falun Gong was made after 10,000 adherents staged a silent protest outside the gates of Zhongnanhai, the Communist Party’s leadership compound in Beijing, to complain about reports in the state-run media that the group said were defamatory. Security forces apparently had no advance knowledge of the demonstration, which took place on April 25, 1999. The Chinese government began treating the group as a threat to national security.”

How about visiting Belching About China