Should the Chinese Communist Party be concerned about the Mandate of Heaven?

However, China’s leaders, like leaders all over the world, were free to rule unjustly and could harm the people they ruled but the thinking was that their rule would come to a swift end as Heaven passed its mandate to another family or group. It’s thought that Heaven blessed the authority of a just ruler, but would be displeased with a despotic ruler and would withdraw its mandate. In addition, severe floods or famines might be considered evidence of divine repeal of the Mandate of Heaven.

As long as the ruling family or political party rules fairly and justly, the majority of Chinese people will see no need to call for change or rebel.

What is the closest thinking to the Mandate of Heaven in the West? Here’s my choice for the United States. Thomas Jefferson, one of the Founding Fathers of the United States, said, “The tree of liberty must be refreshed from time to time with the blood of patriots and tyrants.”? 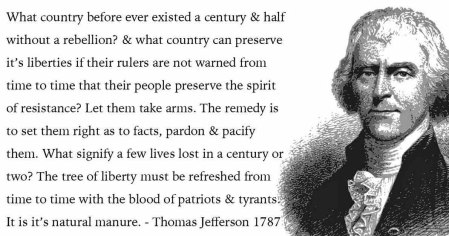 Since I started this post with a question, I’ll end with one. Should the 45th President of the United States be concerned about the Mandate of Heaven and Thomas Jefferson’s advice? Please let me know what you think in the comment section.

This entry was posted on Wednesday, July 19th, 2017 at 05:00 and is filed under China, Chinese Culture, Chinese history, cultural differences, history, Lloyd Lofthouse, politics. You can follow any responses to this entry through the RSS 2.0 feed. You can leave a response, or trackback from your own site.

6 Responses to Should the Chinese Communist Party be concerned about the Mandate of Heaven?