Is acid rain eating away at China and the United States?

K. D. Koratsky’s book, Living with Evolution or Dying Without It, is a heavily researched, scholarly work that gathers what science has discovered since Darwin’s discoveries and fills in the gaps explaining why evolution has something to teach us if humanity is to survive.

The other choice is humanity going the way of the dinosaurs into extinction.

It took me two months to finish reading the 580 pages. The Flesch-Kincaid Readability level would probably show this book to be at a university graduate level leaving at last 90% of the population lost as to the importance of its message.

For months, it bothered me that so many in the United States do not have the literacy skills to understand an important work such as this (the average reader in the US reads at fifth grade level and millions are illiterate). This is certainly not a good foundation to learn how precarious life is if you do not understand how brutal the earth’s environment and evolution has been for billions of years.

For instance, did you now that 252 million years ago volcanic explosions and the CO2 caused by those eruptions resulted in an acid rain that was so intense it was like vinegar and it caused the worse extinction in the earth’s history—over 90 percent of all species on the planet were wiped out. – Smithsonian.com

As I finished reading Living With Evolution or Dying Without It, I realized that it would only take a few key people in positions of power to understand the warnings offered by Koratsky and bring about the needed changes in one or more countries so humanity would survive somewhere on the planet when the next great environmental crises strikes.

On page one, Koratsky starts 13.7 billion years ago with the big bang then in a few pages ten billion years later, he introduces the reader to how certain bacteria discovered a new way to access the energy required to sustain an existence.

By the time we reach humanity’s first religion on page 157, we’ve discovered what caused so many species to die out and gained a better understanding of what survival of the fittest means.

To survive means adapting to environmental challenges no matter if they are delivered by the impact of a monster asteroid to the earth’s surface, global warming (no matter what the reason) or by competition with other cultures or animals competing for the earth’s resources.

In fact, competition is vital to the survival of a species for it is only through competition that a species will adapt to survive.

The book is divided into two parts.  The first 349 pages deals with where we have been and what we have learned, and the two hundred and eleven pages in Part Two deals with current ideas and policies from an evolutionary perspective.

I suspect that most devout Christians and Muslims would dismiss the warnings in this book out-of-hand since these people have invested their beliefs and the survival of humanity in books written millennia ago when humanity knew little to nothing about the laws of evolution and how important competition is to survival.

Koratsky is optimistic that the United States will eventually turn away from the political agenda of “Cultural Relativism” that has guided America since the 1960s toward total failure as a culture.

The popular term for “Cultural Relativism” in the US would be “Political Correctness”, which has spawned movements such as race-based quotas and entitlement programs that reward failure and punish success.

Koratsky shows that the key to survival is competition that rewards merit at all levels of the culture (private and government).

He points out near the end of the book that this has been happening in China and is the reason for that country’s amazing growth and success the last thirty years.

In the 1980s, merit was reinstituted at the bottom and most who prosper in China today earned the right to be rewarded for success by being more competitive and adapting. Even China’s state owned industries were required to become profitable or perish.

It’s obvious that the earth’s environment does not care about equality or the relativists’ belief that everyone has a right to happiness.

This book covers the evolution of the universe, the planet, all life on the planet including the reasons why most life that lived on the earth for hundreds of millions of years before humanity is now gone; the beginnings of the human species; religion in all of its costumes; the growth of civilizations and the competitions that led to the destruction and collapse of so many civilizations such as the Roman Empire and the Han Dynasty two millennia ago.

The environment and evolution says that all life on the planet is not equal and no one is born with a guaranteed right to success, happiness and fun. To survive means earning the right through competition and adaption. That doesn’t mean the losers have to suffer. After all, they do have the right to work, shelter and food—for instance, for the first time in more than two thousand years, no one is starving in China and most of the Chinese have shelter, because in the last thirty years China is responsible for 90% of the global reduction in poverty.

Of course, the Chinese achieved this poverty reduction—in part—by copying the lifestyles of the middle class in the United States.

If you don’t believe Koratsky’s warning, go talk to the dinosaurs and ask them why they’re gone or read that piece from the Smithsonian.com mentioned above.

Lloyd Lofthouse is a former U.S. Marine and Vietnam Veteran, with a BA in journalism and an MFA in writing,
who taught in the public schools for thirty years (1975 – 2005). 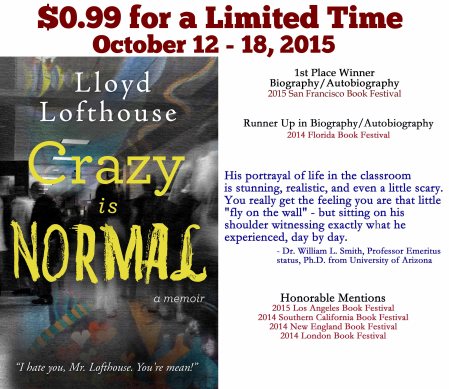 This entry was posted on Wednesday, October 14th, 2015 at 05:00 and is filed under America, China, environment, science. You can follow any responses to this entry through the RSS 2.0 feed. You can leave a response, or trackback from your own site.