German businessman Bernd Hagemann arrived in China in 2002 amidst media reports of China’s impending rise to global domination. “News outlets around the world,” he writes, “were warning us about… how fast China is developing, how competitive it is, and what a tense life the Chinese people must live.”

Casual strolls down the streets of China in between boardroom meetings and networking, however, soon revealed to Hagemann a far less threatening side of China. So he took out his point-and-shoot camera and documented what he saw all around him. In just 148 pages, Hagemann’s debut photography book Sleeping Chinese swiftly dispels 9 years of chest-pounding by the PRC propaganda machine.

Sleeping Chinese is a fun little novelty item the exact same dimensions as a postcard that will leave you either laughing out loud or scratching your head in perplexity. The pages are divided into 3 parts: Hard Sleepers, Soft Sleepers and Group Sleepers, a clever allusion to China’s train carriage classification system. 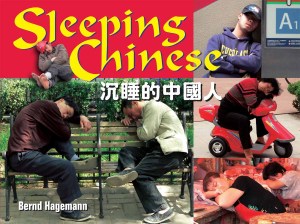 Hard Sleepers: “Those who snooze in hard and uncomfortable places can fall asleep anywhere – even on a pile of bricks in a construction site!” Hagemann defines.

Witness, then, the dozens of people who have drifted into deep slumber atop stones, wood, mortar blocks, concrete and even cold slabs of raw meat. The most comical of the chapter being the dozing shoe repair man balancing precariously on a saw horse with an extra 2×4 for a pillow.

Soft Sleepers: “A little more fussy than their hard sleeper comrades,” the chapter intro explains, “fussy” meaning in plastic wash bins, hammocks slung under freight trucks, sleeping lengthwise across a motor scooter and even a laborer using a tape measure to cover his eyes.

Group Sleepers: “A traveling family needs no pillows when they have each other’s knees.” Truly, the photo of the family of five all huddled together like newborn puppies gives greater meaning to ‘jiating,’ China’s family unit.

Some Chinese might take offense to Hagemann’s photographic agenda, but anyone with a sense of humor will see that the book was made out of affection.

“I’d like to express my appreciation of the hard work and effort put in by migrant workers who play a central role in China’s success story but seldom receive the attention they deserve,” writes Hagemann.

Indeed, anyone who has spent quality time in China knows that these laborers, more than anyone else, deserve their rest — anywhere they can get it.

None of the snapshots in Sleeping Chinese were staged. Any foreign tourist in China who bothers to stray from his package tour group or get out of his hotel for a jaunt off the tourist trail will see these exact same sights, and more.

Incidentally, taking and publishing photos of sleeping Chinese people will often land a foreign tourist in hot water if caught by the authorities (the subjects themselves tend not to mind).

People’s Daily newspaper, the official mouthpiece of the Politburo, even attempted to put a socialist spin on Hagemann’s revealing imagery in an article about Sleeping Chinese: “If (we) are tired, (we) lie down anywhere and anytime and sleep. This shows (our) society’s accepting attitude.”

Regarding the western media’s scare tactics of China’s “waking dragon,” this reviewer is reminded by Sleeping Chinese of a particular song from old-school hip-hop artists Public Enemy (who I had occasion to watch perform during their 2007 tour through Beijing): Don’t Believe the Hype!

Travel photographer Tom Carter is the author of CHINA: Portrait of a People, a 600-page China photography book, available through Amazon.com

This entry was posted on Wednesday, May 27th, 2015 at 05:00 and is filed under book promotion, book review, China, Chinese Culture, cultural differences, tourism. You can follow any responses to this entry through the RSS 2.0 feed. You can leave a response, or trackback from your own site.