Lin Yutang (1895 – 1976) was a Chinese writer, translator, linguist and inventor. He was one of the most influential writers of his generation. In 1933, he met Pearl S. Buck in Shanghai and she introduced him, and his writings to her American publisher.

For most Chinese the end of life lies not in life after death, for the idea that we live in order to die, as taught by Christianity, is incomprehensible, nor in Nirvana, for that is too metaphysical, not in the satisfaction of accomplishment, for that is too vainglorious, nor yet in progress for progress’ sake, for that is meaningless.

The true end, the Chinese have decided in a singularly clear manner, lies in the enjoyment of a simple life, especially the family life, and in harmonious social relationships. 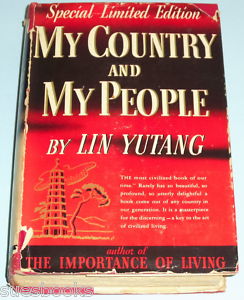 “The Chinese are a nation of individualists. They are family-minded, not social-minded…. It is curious that the word society does not exist as an idea in Chinese thought. In the Confucian social and political philosophy we see a direct transition from family, ‘chia’, to the state, ‘kuo’, as successive stages of human organization.… 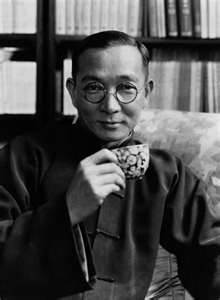 “The Chinese, therefore, make rather poor Christian converts, and if they are to be converted they should all become Quakers, for that is the only sort of Christianity that the Chinese can understand. Christianity as a way of life can impress the Chinese, but Christian creeds and dogmas will be crushed, not by a superior Confucian logic but by ordinary Confucian common sense. Buddhism itself, when absorbed by the educated Chinese, became nothing but a system of mental hygiene, which is the essence of Sung philosophy.” Source: My Country and My People, Lin Yutang. Halcyon House, New York. 1938. Pgs 94; 101; 103; 172, and 108

This entry was posted on Thursday, September 26th, 2013 at 05:00 and is filed under Buddhism, China, Chinese Culture, Christianity, Confucianism, cultural differences, religion. You can follow any responses to this entry through the RSS 2.0 feed. You can leave a response, or trackback from your own site.

5 Responses to Lin Yutang explains Christianity from a Chinese viewpoint