Amy Chua, the Chinese-American Tiger Mother has invaded China with her memoir.  Early results look promising in a market of 1.2 billion readers.

According to the Los Angeles Times, the book has been available online since mid-January and ranked No. 80 in sales as of Thursday on Joyo.com, a Chinese version of Amazon (its rank was 43 as I wrote this post).

The paper version of the book will be out after the Chinese New Year holiday.

However, keeping track of sales of the paper version may be difficult since the Chinese have a tradition of borrowing what someone else wrote, printing it without a contract and not paying the author for it while charging a more competitive price than the contracted publisher charges.

To many in the Middle Kingdom, printing a book you don’t have the rights to is not theft.

After all, Confucius considered all information and entertainment in the public domain even if it is against today’s Chinese law.

The Huffington Post was correct when it said the Chinese edition has a new title and a new cover, which I find more colorful than the drab US version.

The China Daily, which is China’s state owned English language newspaper/Website, quoted a Middle Kingdom mother saying, “I can’t imagine a mother in China so frankly revealing the embarrassment and brutal confrontation she went through while trying to tap her kids’ potential to succeed.”

This matches what my wife said about Chua’s memoir being very non-Chinese. It isn’t acceptable in China to talk publicly about White Elephants in the family and this story, to most mainland Chinese, is a White Elephant better kept as a family secret. 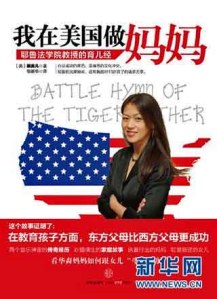 China Daily said, “Many Chinese parents see themselves in Chua, not only in terms of the strict parenting, but the desire to help their children excel. But few hope to be the next Tiger Mother.”

The best quote of the China Daily piece was from Zhang Yiwu, A Chinese literature professor and deputy director of the Cultural Research Center of Peking University: “If anything is worth introspection, I think the Tiger Mother has reminded both Chinese and American parents of the necessity to ditch stereotypical thinking and unrealistic fantasies about ideal parenting models.”

I wonder how many SAP parents (Self-esteem arm of Political Correctness in the US) will read those words and take them seriously–to question fantasy parenting models.

This entry was posted on Thursday, February 3rd, 2011 at 16:00 and is filed under America, American culture, China, Chinese Culture, Chinese women, cultural differences, education, family values, parenting. You can follow any responses to this entry through the RSS 2.0 feed. You can leave a response, or trackback from your own site.