These photos were taken inside Prince Kung’s (1833-1898) palace and garden (once called Gongwangfu). This palace is in Beijing’s Beihai district. Prince Kung was Emperor Hsein Feng’s (1831-1861) younger brother. 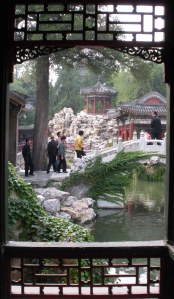 As Inspector General for the Emperor of China, Robert Hart, known as the Godfather of China’s modernism, lived in the same hutong that Prince Kung lived in.  The Forbidden City was on the far side of Tiananmen Square.

Robert Hart, the main character in “My Splendid Concubine” and “Our Hart”, often met Prince Kung in this garden.

After 1950, for several decades, this palace and the garden became a communal home for many Chinese. In recent years, the garden, considered one of the best in China, was renovated and is now a tourist attraction, which attracts thousands of visitors daily.

To design a proper Chinese garden one must build a big place in a small space.  Prince Kung’s garden and estate is surrounded by a high wall and outside is Beijing.  Once inside, it is easy to forget that outside the walls is a crowded city. It was also easy for the Qing (Manchu) royals to forget about what was happening throughout China.

This entry was posted on Saturday, June 26th, 2010 at 16:00 and is filed under China, Chinese history, history, tourism. You can follow any responses to this entry through the RSS 2.0 feed. You can leave a response, or trackback from your own site.

6 Responses to The Prince’s Garden