At the turn of the century, Jack London visited China (1904-05) and saw how hard the Chinese worked. He surmised that Westerners, living in ignorant bliss, had no understanding of Asian cultures and were far too confident of their superiority to realize that their days of world power were severely numbered. He urged that Westerners make concerted efforts to meet with Japanese and Chinese to understand each other better as equals. Source: History News Network

Jack London with his wife

In fact, I’ve met highly educated Chinese who came to the US and couldn’t get jobs in their field of study. Did they give up and lay around complaining how unfair life was?  No. They became handy men or worked in construction for far less than what a Latino, illegal immigrant worker earns. These same Chinese, with strong family values, also save money to send their children to college.

Sir Robert Hart, who lived and worked in China (1854 – 1908) and is considered the Godfather of China’s modernization said the same thing Jack London would say decades later. In the 1880s, he predicted that within a century China would be a super power again. 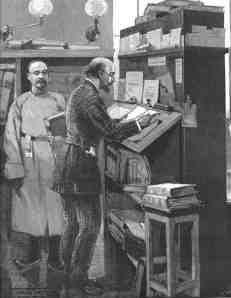 The Chinese work ethic is also reflected in Article 42 of the PRC’s Constitution.

“Citizens of the People’s Republic of China have the right as well as the duty to work. Using various channels, the state creates conditions for employment, strengthens labour protection, improves working conditions and, on the basis of expanded production, increases remuneration for work and social benefits. Work is the glorious duty of every able-bodied citizen. All working people in state enterprises and in urban and rural economic collectives should perform their tasks with an attitude consonant with their status as masters of the country. The state promotes socialist labour emulation, and commends and rewards model and advanced workers. The state encourages citizens to take part in voluntary labour. The state provides necessary vocational training to citizens before they are employed.”

Who built the Great Wall of China?
Who built China’s Grand Canal?
Who built the first emperor’s tomb and all those Terra Cotta Warriors?
Who took a country in 1950 that produced 0.005 kilowatts of electricity and built more than a hundred modern cities in less than three decades with plans to build 400 more—something historians say has never happened in the recorded history of humanity?
Whom has the only viable space program left on the earth with plans to go to the moon and beyond?
Who built America’s Western Railroads during the 19th century?

To learn more see All About Balance

This entry was posted on Sunday, May 30th, 2010 at 12:00 and is filed under America, China, Chinese Culture, Chinese history, cultural differences, family values, government. You can follow any responses to this entry through the RSS 2.0 feed. You can leave a response, or trackback from your own site.

One Response to The Chinese Work Ethic