I wrote about the Blog post in the “Lost Laowai” in my last post about the sunken South Korean navy ship.

There was another funny facetious remark about China sharing a distaste for McDonald’s that was a cause for smiles.

Maybe China’s government doesn’t care for McDonalds, but many Chinese see McDonald’s and Pizza Hut as gourmet restaurants.  McDonalds is even planning to increase the number of outlets in China to 2,000 by year’s end. 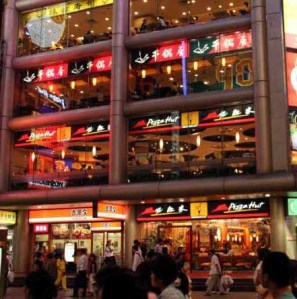 Several years ago, my sister-in-law hired a Shanghai ballerina to model for a photo shoot.  Afterwards, the ballerina called her husband on a cell phone and told him to meet her at the large, two story McDonalds in the middle of Shanghai to celebrate earning the extra cash.

In addition, we have often seen long waiting lines outside a swanky Pizza Hut on Shanghai’s Nanjing Road, and crowded pedestrian mall.

This entry was posted on Tuesday, May 25th, 2010 at 16:00 and is filed under business, China. You can follow any responses to this entry through the RSS 2.0 feed. You can leave a response, or trackback from your own site.

One Response to Eating Gourmet in Shanghai