The National Geographic special issue, “Water, Our Thirsty World” (April 2007) compares the world’s largest democracy, India, with China. In “The Big Melt” by Brook Larmer, we see a convincing reason why China’s mix of socialism and capitalism may be the world’s answer to avoid future calamities. Where Western style democracies stall due to partisanship, special interests, religious beliefs and political agendas, China’s government, ruled by engineers and scientists, appears to be planning decades ahead.

The claims by Tibetan separatists and their supporters that China rules over Tibet with an iron dictatorial fist also appears to be wrong when Larmer visits a family of Tibetan nomads. He writes, “There is no sign of human life on the 14,000 foot high prairie that seems to extend to the end of the world.” Larmer sees “the NOMADS’ tent as a pinprick of white against a canvas of brown.”

We meet Ba O, a Tibetan nomad. In Ba O’s tent, “there is a small Buddhist Shrine: a red prayer wheel and a couple of smudged Tibetan texts…” A few years earlier, Ba O had several hundred sheep and the grass was plentiful. Now the Tibetan nomad has about a hundred left and fears this way of life is ending.

Ba O says, “This is the way we’ve always done things. And we don’t want that to change.”

However, change is coming, and there is nothing Ba O can do to stop it. The change is not from China’s government. It is from global warming. The Tibetan grasslands are dying and a way of life that has existed for thousands of years may be dying too. 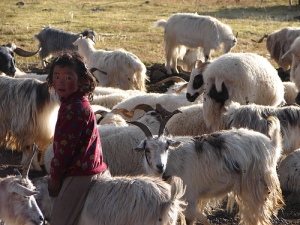 To insure that the Tibetan nomads will have a place to live, China’s government has been building resettlement villages. The “solid built” houses are subsidized. When the Tibetan nomads can no longer survive on the open Tibetan prairie, it is the nomad’s choice to move into the new villages. The government does not force them to give up their old way of life. Nature does that.

Along with the house comes a small annual stipend for each family so they can eat as they find another way to earn a living. The home Larmer visited had a Buddhist shrine and a free satellite dish for a TV and maybe an Internet connection. In addition, the one child policy does not apply to the Tibetan people since they are a minority in China.

To make sure there will continue to be water to drink, China is planning to build 59 reservoirs in Tibet to capture and save glacial runoff.

In India, the young wife of a fortuneteller spends hours each day searching for water. She lives with her husband and five children in Delhi, India‘s capital. There are fights over water. In a nearby slum, a teenage boy was beaten to death for cutting into a water line.  The demand for water in Delhi exceeds the supply by more than 300 million gallons a day.

What happens to life when there is no water?

This entry was posted on Monday, April 19th, 2010 at 16:00 and is filed under China, Chinese minorities, environment, family values, government, India, Tibet. You can follow any responses to this entry through the RSS 2.0 feed. You can leave a response, or trackback from your own site.