More than 90% of babies in Chinese orphanages are girls. Prior to 1949, it was common for parents to murder girl infants. From the 1950s to the end of the 1970s, due to Mao’s leadership and a tough stance for women’s equality, the death rate went down. Then in the 1980s, with the population growing too fast, a desperate government implemented the one-child policy.

After that, many girl babies went missing or were abandoned to state-run orphanages. To end this tragedy, the government eventually allowed rural families to have two children per family—hoping for a boy.

The conditions in these rural, state-run orphanages are often not ideal. Girls, who are not adopted, usually end up being the caregivers for the younger children. Since these orphan caregivers were raised without the love of parents and siblings, they may not be loving themselves creating a cold environment to grow up in. 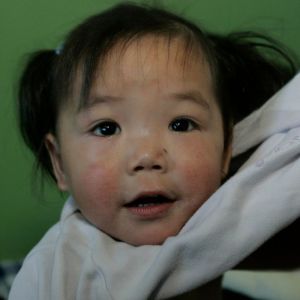 It isn’t as if China’s government has done nothing to stop a practice that has been around for thousands of years. During the 90s, tougher laws were passed but often ignored. Government inspectors were sent to rural areas to enforce these laws, but it isn’t easy controlling a population of 1.3 billion scattered over a mountainous country almost the size of the United States.

I will not criticize the Chinese government for these conditions. I’ve been to China and understand the challenges. What would you do if you had inherited a medieval country in 1949 that was bankrupt due to the Kuomintang looting the banks and treasury as they fled to Taiwan under American protection? Then there is a culture reaching back thousands of years where girls were considered worthless. That is a lot to overcome.

Discover Gendercide in China and India, and also see the conclusion of one orphan’s journey in Saying Goodbye

This entry was posted on Friday, April 2nd, 2010 at 08:00 and is filed under China, Chinese Culture, Chinese history, Chinese women, family values, government, parenting. You can follow any responses to this entry through the RSS 2.0 feed. You can leave a response, or trackback from your own site.