Note from Blog host — another example of East meets West through business and trade: Molly McMillan of McClatchy newspapers, reported, “In the past year, China has been ‘snapping up’ U.S. general aviation companies, including a recent deal to buy cash-strapped Cirrus Aircraft… In buying up established companies, China gets the management know-how, brand, distribution, technology in days, not decades,” said Brian Foley, with Brian Foley Associates.

About any time, day or night, in major Chinese cities you can see any type of vehicle transporting all imaginable products on the roads. There are trucks carrying ocean containers and Mercedes carrying people. I have traveled to England, Ireland, Holland, Italy, Canada, Mexico, Indonesia, Malaysia, Korea, and China. I would not call myself a “world traveler” but, of all the countries in which I have traveled, I found China to be the most diverse in terms of the types of vehicles that transported goods on their roads.

Regardless of where my travels took me in China—rural or city—there were always a lot of people transporting goods in any type of vehicle that could move on its own, by animal, or under human power. The fact that people were busy working was not of particular note. It was the diversity of their means of transportation within a single view that was of interest to me. Also, they all seemed to move with purpose—whether carrying large or small items. I suppose that is really not so different than any other parts of the world—for some reason it just struck me as another admirable quality of the Chinese people. 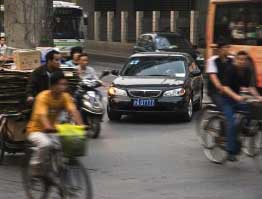 Most of the smaller commercial trucks are blue—I have no idea why? I asked a couple of times but really did not receive an answer. Maybe there was a sale on blue paint? I am certain there is a reason, but since I don’t know it, I can’t share it with you—rather just make reference to it.

I will say that with all those vehicles on the road it did add to the air pollution. In most states in the U.S., vehicles have to pass safety inspections before they can be licensed. I am not certain this is a rule in China—if it can move it is road ready.

In my travels inside China for business, I found the Chinese to be very capitalistic in nature—certainly contrary to how I viewed the Chinese people prior to me actually visiting the country. The diversity in the means of transporting their goods is just one example of this fact at least in my mind.

Note from Blog host – If you plan to do business in China, I recommend visiting the China Law Blog first.

Continued February 27, 2012 in Americans doing Business in China – Part 7 (a guest post) or return to Part 5

Halloween in America is celebrated the last day in October.

However, in China, the closest celebration to America’s Halloween is The Hungry Ghost Festival, which is celebrated the 14th or 15th night of the 7th lunar month in August. For 2011, that was August 14. In 2012, it will be August 31.

The Ghost Festival, also known as the Hungry Ghost Festival, is a traditional Chinese festival and holiday celebrated by Chinese in many countries, in which ghosts and/or spirits of deceased ancestors come from the lower realm or hell to visit the living.

Buddhists from China and Taoists claim that the Ghost Festival originated with the canonical scriptures of Buddhism, but many of the visible aspects of the ceremonies originate from Chinese folk religion, and other local folk traditions (see Stephen Teiser’s 1988 book, The Ghost Festival in Medieval China).

In America, most children wear costumes and go door to door collecting free candy.  In China food is offered to dead ancestors, joss paper is burned and scriptures are chanted.

Chinese Culture.net says the Hungry Ghost Festival is “Celebrated mostly in South China, Hong Kong, Taiwan and especially in Singapore and Malaysia… It is believed by the Chinese that during this month, the gates of hell are opened to let out the hungry ghosts who then seek food.

By comparison, History.com says, “Halloween’s origins date back to the ancient Celtic festival of Samhain (pronounced sow-in). The Celts, who lived 2,000 years ago in the area that is now Ireland, the United Kingdom and northern France, celebrated their new year on November 1. This day marked the end of summer and the harvest and the beginning of the dark, cold winter, a time of year that was often associated with human death. Celts believed that on the night before the new year, the boundary between the worlds of the living and the dead became blurred.”

Continued on October 30, 2011 in The Hungry Ghost Festival – The Chinese Halloween – Part 2

Subscribe to iLook China — there is an “E-mail Subscription” link at the top of the screen.