Jobless in America and Angry at China

When the economy tanks and Americans lose jobs, I often read or hear that it’s China’s fault.  Timothy V, a typical China basher that I’ve been debating on Gather, is an example. Using China as a scapegoat for lost jobs in America appears to be a popular pastime.  After all, many in America need someone to blame for the hard times.

The Economic Policy Institute says that between 1997 and 2006, the trade deficit between the U.S. and China could have supported 2,166,000 jobs. This report doesn’t say that manufacturing jobs were lost in America to China. It means that when China joined the WTO (World Trade Organization), jobs were created for Chinese workers that might have gone to the United States. 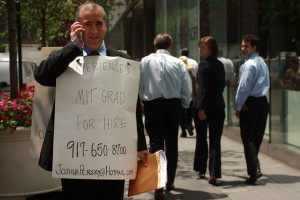 What happened after America’s economic bubble popped in 2008? CNN reported that 2009 was the worst year for jobs lost in the United States since 1945.  A sobering U.S. Labor Department jobs report showed the economy lost 1.9 million jobs in the year’s final four months.

Do not forget who caused the current global economic crises and those job losses. “Global Issues.org” describes the crisis that was caused by greed in America.

If you believe someone like Timothy V, those job losses should be blamed on China, but he is wrong. The BBC reported that Chinese migrant factory job losses mount. A Chinese government official, Ma Jian Tang, told reporters in January (2009) he thought roughly 5% of the country’s 130 million migrant workers had returned to their villages after losing jobs. (Note: I wonder why I couldn’t easily find this from an American news source.)

Out of work in China

How can anyone in China be stealing jobs from Americans? Do I need to mention the millions of jobs lost to illegals that cross America’s Southern border and take hard, low-paying jobs that Americans don’t want? According to this report from NPR, that number is about 12 million.

When I was fifteen, I started my first job washing dishes in a department store coffee shop that served lunch and dinner and I worked nights and weekends there for three years while attending high school. There were several of us doing that job, and we were all American born teens. Before I joined the US Marines, I worked in a car wash, a McDonald’s and other jobs that most Americans won’t touch today. In Steinbeck’s novels, the farm workers he writes about were mostly poor Americans who went into the fields to plant and pick—not illegals from south of the border.

In fact, the jobs are there but too many Americans won’t consider them because they won’t pay for an American middle-class credit card driven, consumer lifestyle where people eat out more than they eat in and everyone “has” to have the American dream.  Can’t buy that with low wages.

This has happened before. After World War II, American jobs were lost to Japan and Germany.  Then after the Korean War, more jobs were lost to South Korea and Taiwan as they built factories.  In the 1950s, GM, Ford and Chrysler were building and selling about 90% of the cars and trucks globally.  Then Toyota and VW arrived in the United States. Who was stealing US jobs then?  It wasn’t China.

In reality, it’s all about finding a scapegoat to slaughter while the guilty quietly slip away.