Before Western Imperialism attempted to change Asia during the 19th century, China was a regional super power for more than two-thousand years. Over time, the Chinese believed they were too civilized and powerful to be threatened by anyone on the planet.  Then the British, French, Portuguese, Germans, Americans, Russians and Japanese arrived and waged war in China for a century starting with the First Opium War.

China learned a lesson from all of these wars. It only took a century to recover and start over.

The leaders of China are called Communists, but the men and women who rule China were born Chinese and the decisions they make are based on being Chinese—not being Communists. The Chinese culture is a collective culture and when an “individual” crosses the line and breaks the rules doing or saying something that is unacceptable to the collective culture, they are erased (given a death sentence) or reeducated (if possible). That’s how the Chinese collective culture on the mainland does things.

In time, interaction with other cultures may change that.  In fact, China already has changed to some degree. Friendly, harmonious interaction is the key—not hate and accusations like those from Americans like Timothy V.

An example of how hard the Chinese work stands in the Great Wall of China and the Grand Canal. To understand the significance, we will look at the Suez and Panama Canals first as a comparison. 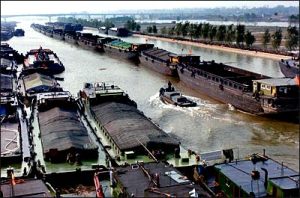 In the 19th century, the French built a canal 100 miles across the Isthmus of Suez. When it opened, the Suez Canal was only 25 feet deep, 72 feet wide at the bottom and 200 to 300 feet wide at the surface. About 20,000 ships use the canal each year. Source: History.com

When I was in grade school, we learned about the Panama Canal in glowing terms. I’m sure the French and British brag about the Suez Canal in their textbooks too.

Until my first trip to China in 1999, I had never heard of the Grand Canal, which is the oldest and longest man-made canal in the world at more than a thousand miles from Beijing to Hangzhou south of Shanghai.

The construction started almost five hundred years before the birth of Jesus Christ and was completed centuries later.  The canal is still in use today.  To finish it, the Pound lock was invented in the 10th century during the Song Dynasty. There are 24 locks and about 60 bridges.  Source: Wikipedia

The history of the Summer Palace starts with the Jin Dynasty (1115-1234) when the Golden Hill Palace was built in the present site of the Summer Palace.  The Summer Palace that exists today dates back to Kublai Khan (Yuan Dynasty – 1277-1367).  In 1750, Emperor Qian Long (Ch’ing Dynasty – 1644 -1911) had canals built leading to Kunming Lake, which was enlarged to serve as a reservoir for Beijing and is still in use today. He built palaces on the hill to celebrate his mother’s birthday.

In 1860, during the Second Opium War, a combined British-French military force invaded Beijing and destroyed many of the buildings.  Twenty-eight years later, the Dowager Empress Ci Xi’s brother-in-law rebuilt and expanded the palaces using money (when he was the leader of China’s the navy) that was meant to modernize the Chinese navy.

This “site” has more pictures and information about the Summer Palace.

This “video” shows the Summer Palace from the main gate to Suzhou Street where Emperors went to be entertained.

Pagado seen from the Summer Palace

Balzac and the Little Chinese Seamstress

I read Balzac and the Little Chinese Seamstress soon after it came out.  A few years later, we drove more than sixty miles to see the Mandarin language movie. Checking Amazon this morning, I saw there have been 230 customer reviews for the book with a four out of five star average. This short novel spent twenty-three weeks on the New York Times best-seller list. The author, born in China, moved to France where he learned to read, speak and write French. The book was originally written in French and translated into English by Ina Rilke.

The story is about two likable, teenage boys and their struggle after being banished to a peasant village for “re-education” during the Chinese Cultural Revolution. Sons of doctors and dentists, the boys work at muscling buckets of excrement up the mountainside and mining coal. Then there is the little seamstress of the title, whom Luo, one of the boys, falls in love with. He dreams of transforming the seamstress from a simple country girl into a sophisticated lover. He succeeds beyond his expectations, but the result is not what he expected.

This link goes to the Mandarin language DVD with English subtitles.