China’s love affair with superstition, pseudoscience and the fantastical may be traced back over five millennia, whence some of history’s oldest myths and legends originated.

Journey to the West (Xi You Ji), published anonymously by scholar Wu Cheng’en in the 16th century Ming Dynasty, remains China’s most beloved fantasy story.  Considered one of the “Four Great Classical Novels” of Chinese literature, the 100 chapters of ‘Journey’ are replete with monkey kings, flesh-eating demons, immortal sages and celestial battles.

When science fiction became all the craze in 1950’s America, Red China followed suit by founding its first sci-fi periodical.

However, unlike the west, where rapid advances in the tech sector fueled science fiction, China promoted sci-fi to help inspire its own dormant technological progress.

Conversely, about the same time during the 70s when American director George Lucas was preparing to film a little space opera called Star Wars, the Cultural Revolution was banishing all China’s scientists to hard-labor communes.

Indeed, where the Chinese have categorically failed in speculative fiction (programming on the Communist-controlled CCTV is evidence enough that future perspective is held in little regard here: of China’s 19 official television channels, all feature serials set in olden times, some in the present, none about the future), they remain masters of mythology and purveyors of the past.

Present-day PRC is seeing a renaissance of the fantasy genre.  The wuxia-inspired Chinese film Crouching Tiger, Hidden Dragon was a critical and commercial success, generations of young, Chinese cyber-punks are hopelessly addicted to the virtual sorcery of World of Warcraft, and Harry Potter remains China’s “most pirated novel ever”.

Even so, no Chinese author has ever been able to replicate the success of Journey to the West; as a result, publishing houses in the Middle Kingdom prefer to translate western best-sellers such as Lord of the Rings and Narnia rather than take their chances on local fantasy fiction writers.

Born in Guangdong province during the Cultural Revolution (both her parents were exiled to the countryside for being “intellectuals”), Zee was raised on a literary diet of propaganda and scar literature.

Rather than publish a clichéd daughter-of-the-Revolution memoir about her hardships, the aspiring author opted for the escapism of fantasy. Hence, her decades-in-the-making debut novel, The Altethlon Chronicles. 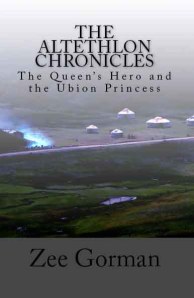 A high-fantasy fiction set in a parallel universe either far in China’s future or in its past, The Altethlon Chronicles is a complex blend of military, history, romance and sorcery.

Leading the rich cast of green-eyed, purple-skinned characters is the royal yet rebellious teen Ximia (“what kind of princess are you anyway, running around like a wildcat?”) and her forbidden lover, Nikolas, the leader of a rival tribe – a tumultuous relationship most likely inspired by Zee’s own experience with cultural clash when she immigrated to the U.S. and married an American.

Ximia is misled into believing that Nikolas has been killed during an escape attempt, whereby the princess is married off by her father to a dastardly lord.  The two young warriors go on to lead their respective armies until the day when destiny arranges for them to meet again in battle.

In creating this alternate world, Zee draws heavily on her Chinese heritage.

Kingdoms such as Manchuli, Dalong and Taklaman are each reminiscent of real regions in China.

Nonetheless, Zee, who is bi-lingual and holds dual degrees in English Literature, chose to write The Altethlon Chronicles in her second language and self-publish in America rather than risk having it pirated in China’s nascent fantasy market.

Some realities are worth escaping.

Travel photographer Tom Carter is the author of CHINA: Portrait of a People, a 600-page book of photography from the 33 provinces of China, which may be found on Amazon.com.