During the Copenhagen Climate Summit, China was criticized for not signing a pledge to reduce carbon emissions.  I don’t think China’s was ready to sign and had to go home to study the situation to see what they could do before they made a commitment.  All (take a look) of China’s politburo members, the top government body in China, are scientist or engineers.

On March 10, China told the United States to make stronger commitments on climate change and provide environmental expertise and financing to developing nations. That was a few days after China announced it was planning to reduce its carbon footprint by 40-45% (from 2005 levels) and generate 15% of its electricity from renewable technologies by 2020.

Obama, on the other hand, only pledged reducing green house gas emissions “in the range of 17%” by 2020.

President Obama is a lawyer. Most of the elected representatives in America’s two houses of congress are lawyers.

It looks like China’s space program will fuel humanity’s next trip to the moon and beyond. The Middle Kingdom has everything needed to succeed. China is turning out more engineers from its universities than the United States is, and China has the technology and industry to support an active, growing space program. 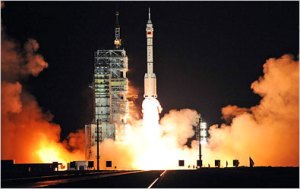 It helps that seven of China’s nine-man Politburo Standing Committee, the country’s top ruling body, are engineers instead of lawyers or businessmen like in America. In addition, China has trillions of dollars to spend and no national debt.

In the last few years, China has sent men into space and conducted space walks. There is a strong chance that in a few more years, there will be Chinese space stations orbiting the earth with footprints on the moon that were not made by Americans.

We were in China when the space walks took place, and it was big news filling TV screens and splashing headlines across newspapers. The excitement was equal to the time Americans walked on the moon decades ago. Now, America’s space program is limping along—almost a cripple.

The honor China lost during the 19th and early 20th centuries to the bully tactics of aggressive Western powers and Japan during World War II is being reclaimed. For more than two thousand years, China was a regional super power.  It seems they have achieved that status again.