Since America’s 2010 midterm elections are being held in November, the Citizens Against Government Waste (CAGW) ran a political video designed to exploit fear of China.

Evidently, the CAGW decided they could fool some of those people in time to make sure they vote against Democrats.

New York Magazine ran a piece, Is this Really the Best Political Ad This Year, which proves why it is dangerous to be a democracy instead of a republic.

Ben Smith of POLITICO writes, “This slickly-produced new ad from Citizens Against Government Waste … attacks spending in the Mandarin-speaking voice of a gloating, future Chinese professor.”

The sad thing is that millions of Americans believe these distortions.

According to the PEW Global Attitudes Project, 36% of Americans view China with an unfavorable view.

It is no secret that Rush Limbaugh is a Sinophobe and has between 14 and 30 million listeners (depending on who you read).  Glenn Beck has about two to three million.

In fact, the people that Rush and Beck appeal to must be some of the voters the CAGW is hoping to influence.

The National Center for Educational Statistics shows us that forty-three percent of Americans read at or below basic, which means 93 million votes could be influenced through fear of China.

After all, the illiterate and semiliterate are the easiest voters to fool and that’s why they shouldn’t be allowed to vote.

The American Conservative Daily, with air between ears, says this about the fact that learning English is mandatory in China’s public schools, “A nation planning to invade and occupy another nation would learn that nation’s language.” 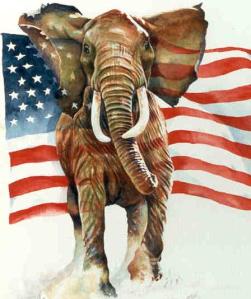 Did the Japanese make learning English mandatory in Japan before bombing Pearl Harbor?

Since when has any nation required its citizens to learn the language of a nation they are planning to invade and conquer?

When the US waged war against American indians, many indian children were sent to Christian boarding schools and forced to learn English and forget their native language. US citizens were never required to learn any American indian languages.

When the US won the Spanish America war and acquired territories like the Philippians where Spanish was spoken, did the US make Spanish mandatory in the US schools?

When I was in the US Marines and fought in Vietnam, I didn’t have to learn Vietnamese.

The reason China made English mandatory is because America is China’s largest trading partner and China has invested more than a trillion dollars in America.  If you ever visit any of China’s major cities, like Shanghai or Beijing, you may notice that the street signs are in English and Chinese.  On the subways, the voice that announces the next stop says it first in English and then Chinese.

Rural citizens of China have been protesting the lack of quality health care outside the cities where eight hundred million Chinese live. This topic was also a subject for debate in China’s legislature, known as the National People’s Congress. (see Basic Health Care in China (http://wp.me/pN4pY-bO)

Another complaint China’s government wants to deal with is the shocking price increases to buy a home in one of China’s cities. Housing costs in seventy Chinese cities jumped 9.5% from a year earlier. The government wants to bring those prices down to make housing more affordable.

During the Copenhagen Climate Summit, China was criticized for not signing a pledge to reduce carbon emissions. China recently announced that it is planning to reduce its carbon footprint by 40-45% (from 2005 levels) and generate 15% of its electricity from renewable technologies by 2020. Over the next ten years, we should see these changes taking place. Since most of China’s leaders are engineers, they often set long-term goals.

By comparison, President Obama said at Copenhagen that the United States intended to reduce its greenhouse gas emissions “in the range of” 17% by 2020.  Since the Chinese government doesn’t have to deal with American conservatives, who do not believe carbon emissions are causing global warming and block legislation and spew confusion at every chance, I’d place my bet on China achieving their goals first.