If you live in China and you think the streets in America are paved in gold, take a close look at how many deadbeats there are in the United States living off welfare, and you might be surprised who the real welfare queens are.

Wow, and in September 2014, there were 146.6 million Americans who were working at paid jobs.

But, a few, far-right billionaire oligarchs—for instance, the Walton family and the Koch brothers, and the fools who swallow their propaganda—think that more people in the United States are on welfare and are deadbeats than those who are working and supporting them.

I think it is arguable and safe to say that it would be a misleading lie that the majority of the Americans who are not working are deadbeats on welfare. Only a fool could think that. Is it possible that there are only 4.2 million Americans—who could be deadbeats—between 18 and 65 who do not have a paying job—that’s only 1.328% of the total population? I bet most of those 4.2 million are probably disabled and can’t work or are a stay at home parent.

Did you know ABC reported that Americans work more than anyone in the industrialized world—more than the English, the French, the Germans or Norwegians and even, recently, more than the Japanese?

In addition, according to the OECD, in the United States 67% [that is almost 70%] of people aged 15 to 64 [the working class years] have a paid job. … And having a good education is an important requisite for finding a job. In the United States, 89% of adults aged 25-64 have earned the equivalent of a high-school degree, higher than the OECD average of 75%—and yet some billionaires, including Bill Gates [worth almost $80 billion], the Koch brothers and the Walton family, would have you believe that the public education system in the United States is failing and must be reformed.

20 Something Finance even says “The U.S. is the Most Overworked Developed Nation in the World.” And Business Insider says the average person spends 90,000 hours at work over their lifetime—based on a 5 day 8 hour workweek with a two week vacation annually, that equals 45 years. I worked 45 years, starting at 15 and I retired at 60.  My retirement check comes from CalSTRS, and I paid 8% of my gross income into CalSTRS for the 30 years I was a classroom teacher.

But a Houston based billionaire, according to the Democratic Underground, is attacking public pensions with a goal to kill the guaranteed-benefit plans that are run by teacher retirement systems in every state. This billionaire’s name is John Arnold, who is worth $2.9 billion dollars. Arnold runs a Houston-based hedge fund, and before that he worked for Enron, and it is said that he earned $750 million for Enron the year it went out of business. Huh, how do you earn $750 million for a company that goes out of business the same year?

Contrary to the popular thinking of fools, Social Security is not a form of welfare because workers and employers pay into that program for their entire working life, and in 2013, there were 38 million retired workers—nine out of ten individuals age 65 or older—who collected an average monthly benefit of $1,294. There were 4.9 million dependents; 8.8 million disabled workers, who were paid an average of $1,145 a month, and 6.2 million survivors—survivors are young children and a surviving spouse who cares for the children.

From Media Matters.org we learn that nearly half (47% or 23 million), who get food stamps, were under the age of 18, and another 8 percent (3.9 million) were 60 or older; 41% (more than 20 million) lived in a household with earnings from a job. These workers are known as the “working poor”, and the average household on food stamps received a monthly benefit of $287.

And, these so-called deadbeats—that a few billionaires and a lot of fools think outnumber working Americans—are allegedly robbing us blind while they sit around drinking beer, eating popcorn and watching TV or having sex 18-hours a day to make more babies so they can collect more food stamps. If you believe that, then you might want to look in a mirror to see a fool.

If these billionaires succeed, what will replace progressive era plans like CalSTRS, Social Security, Medicare, unemployment and food stamps?

If we look back at history, we might discover the answer to that question. In 1900, before Presidents Theodore Roosevelt, Taft, Wilson, FDR, Kennedy and LBJ, ushered in the progressive era, 40-percent of Americans lived in poverty with only a 5% unemployment rate, and up until 1938, in some states, children could be sold as young as five to factories, coal mines and whorehouses. Imagine your five-year old child working as a prostitute, because boys and girls were sold into prostitution back then when the U.S. was ruled by capitalist Robber Barons.

Is this the America a few billionaires, with help from some fools, are fighting to get back?

By the way, did you watch the video that comes with this post? It really is an educational eye opener.

Lloyd Lofthouse is a former U.S. Marine and Vietnam Veteran,
who taught in the public schools for thirty years (1975 – 2005).

His third book is Crazy is Normal, a classroom exposé, a memoir. “Lofthouse presents us with grungy classrooms, kids who don’t want to be in school, and the consequences of growing up in a hardscrabble world. While some parents support his efforts, many sabotage them—and isolated administrators make the work of Lofthouse and his peers even more difficult.” – Bruce Reeves 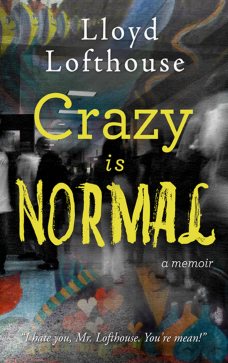 This entry was posted on Monday, October 13th, 2014 at 17:57 and is filed under America, American culture, business, capitalism, crime, economy, government, Lloyd Lofthouse, politics, propaganda, United States. You can follow any responses to this entry through the RSS 2.0 feed. You can leave a response, or trackback from your own site.