In 2008, after checking into our Guilin hotel in Southeast China near Vietnam, we hired a taxi and visited Reed Flute Cave (Ludi Cave), which is in Northwest Guilin.

Reed Flute Cave was named during the Tang Dynasty (618 – 907 AD) due to reeds (Ludi Cao) growing near the cave’s entrance, which are still used to make flutes.

There are historical stone ink inscriptions inside the cave dated to 792 AD.

Millions have walked these paved pathways. Reed Flute Cave has been an attraction for over a thousand years, and the modern tour lasts about an hour.

During Times of war, the local people would hide in the cave. One grotto, the Crystal Palace of the Dragon King, could hold a thousand people. 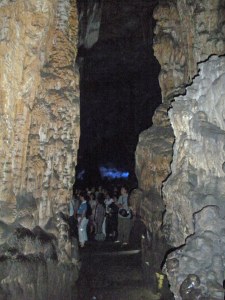 Crown Cave was the second underground attraction, but it was late and the next day we were on our way to the Li River.

This entry was posted on Wednesday, October 8th, 2014 at 05:00 and is filed under China, Chinese history, tourism. You can follow any responses to this entry through the RSS 2.0 feed. You can leave a response, or trackback from your own site.

3 Responses to Going Underground in Guilin