In 1999, I visited the The Great Wall for the first time.  We returned to visit a different section in 2008. The second time, I carried a digital camera (a few of those photos appear with this post)

Smithsonian Magazine reported, “Few cultural landmarks symbolize the sweep of a nation’s history more powerfully than the Great Wall of China. Constructed by a succession of imperial dynasties over 2,000 years, the network of barriers, towers and fortifications expanded over the centuries, defining and defending the outer limits of Chinese civilization. At the height of its importance during the Ming dynasty (1368-1644), the Great Wall is believed to have extended some 4,000 miles, the distance from New York to Milan.

The sections of the Great Wall we visited are about an hour out of Beijing. The most popular site is at Badaling.  The second choice, Mutianyu, is more dramatic. This portion of the Great Wall runs along the ridge of a mountain range. Badaling, meanwhile, is in a mountain pass. 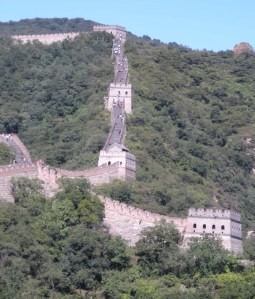 The best way to reach the Great Wall is by taxi or bus. After you get there, you will discover the usual tourist shops. Since I enjoy haggling, I spend time shopping.

At Badaling, there were camels and horses you could pay a fee to sit on while having your photo taken.

Once you reach Mutianyu, you have a choice—take a few hours to climb the mountain to The Wall or ride a ski lift to the top in fifteen minutes.

China’s Great Wall was not built by one emperor. It was built in segments by the kings of several nations over a period of centuries. In addition, the wall was completed and linked together by China’s first emperor in 221 BC. 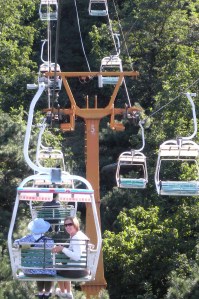 When you are on the wall, if you get thirsty or yearn for a snack, there are venders that carried their goods often using horses.

Once you are ready to leave the Great Wall at Mutianyu, the toboggan ride is worth the price.( see the embedded video with this post)

This entry was posted on Tuesday, July 24th, 2012 at 06:00 and is filed under China, Chinese Culture, Chinese history, expatriates, expatriots, tourism. You can follow any responses to this entry through the RSS 2.0 feed. You can leave a response, or trackback from your own site.