Mao Wei Tao is considered a living treasure in China. She imitates men in the opera roles she plays—a reversal from Imperial China when women were not allowed on stage so men played female roles.

“In 1923, the training of female actors for this art form was set up. Since 1928, the Shaoxing opera troupes, consisting of solely female actors, began their performances in Shanghai. In a few years, females impersonating males had become the most important feature of this opera form, and at the same time the Yue opera became well known all over China.”

In her thirty-year career on the stage, she’s best known as an outstanding male impersonator with a cult following of women. 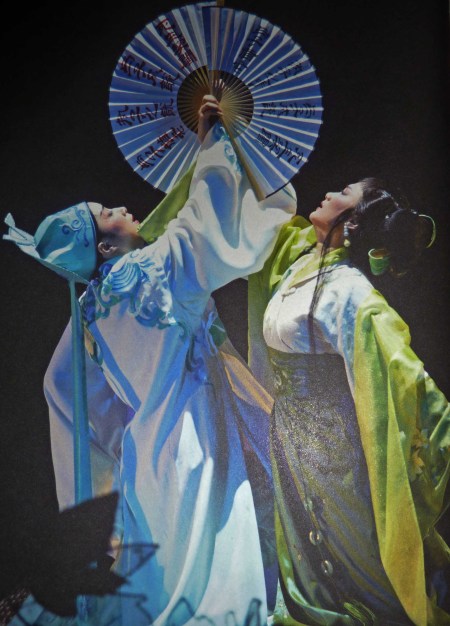 I was introduced to Yue Opera in Hangzhou, Zhejiang Province about a decade ago.

Mao Wei Tao and her husband have a theater company near the shores of the famous Westlake. My wife translated while I watched the live-opera performance in fascination.

The costumes were lavish and the acting and opera was dramatic while classical Chinese music played in the background.

The challenge today is to keep this form of Chinese opera alive. The audience for opera is shrinking dramatically in China while remaining popular with the older generation.

Television, movies and the Internet are claiming the shorter attention spans of younger Chinese

Mao Wei Tao, considered an innovative genius on stage, adapts and works to keep the art form alive. According to her husband, no two performances are exactly alike.

In November 2010, she performed in Taiwan as a cultural ambassador from the mainland.

This revised and edited post first appeared on March 14, 2010 as Mao Weitao and Yue Opera

This entry was posted on Saturday, June 18th, 2011 at 11:00 and is filed under China, Chinese arts and music, Chinese Culture, Chinese history, Chinese women, cultural differences, Taiwan. You can follow any responses to this entry through the RSS 2.0 feed. You can leave a response, or trackback from your own site.