While visiting China in September/November of 2008, we went to Guilin, went underground to the Reed Flute Cave, hiked the Dragon’s Back, cruised the Li River and spent two days in Yanghsuo.

A brief tour from Guilin to Yanghsuo

Then we saw Zhang Yimou’s breathtaking staged production, the Impressions of Liu Sanjie, which I recommend to anyone visiting Southeast China.

One of the lightshow scenes from “Impressions of Liu Sanjie” 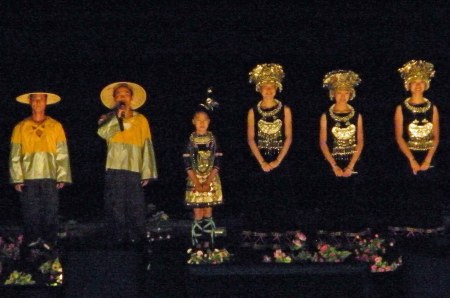 Zhang Yimou, the director, is an internationally acclaimed Chinese filmmaker. He made his directorial debut in 1987 with the film “Red Sorghum”.

In the 1990s, Zhang Yimou directed “Raise the Red Lantern”—nominated for Best Foreign Language Film at the 1991 Academy Awards.

The “Impressions of Liu Sanjie” is performed on the river at night. However, you may be more familiar with Zhang Yimou’s opening and closing ceremonies for the 2008 Beijing Olympics.

More from the “Impressions of Liu Sanjie”

The “Impressions of Liu Sanjie” is performed with the Karst Mountains and the Li River as the setting.

The cast comes from the local Guangzi Zhuan Autonomous Region  and many may be fishermen by day and actors at night and are from the Zhuang and Yao minority groups, who live in that region.

This entry was posted on Monday, August 16th, 2010 at 12:00 and is filed under China, Chinese arts and music, Chinese Culture, Chinese minorities, cultural differences, tourism. You can follow any responses to this entry through the RSS 2.0 feed. You can leave a response, or trackback from your own site.

2 Responses to Impressions of Liu Sanjie