Propaganda Masquerading as a Movie Review

I found another example of media propaganda in a movie review. In June 1989, the Tiananmen Square incident took place in China and “hundreds” of demonstrators died in what started as peaceful demonstrations “demanding” changes in China.

A few months later, a New York Times review made comparisons between the first emperor and China’s modern government. “The depiction of Qin’s bonfire and of his soldiers pushing his flailing enemies (they weren’t the emperor’s enemies) into a ditch caused the American Museum of Natural History to cancel its planned opening of ”The First Emperor of China” last July, when the news was still full of the Chinese Government’s violent suppression of student protests.… This re-enactment of the faraway Qin’s often despotic and often enlightened rule becomes more believable and complex in view of the parallels with recent events.”

The New York Times made a comparison with an event that took place more than two millennia ago but made no mention of the 2/28 Massacre in Taiwan by a US ally where almost thirty thousand noncombatants were killed by Kuomintang troops. There was also no mention of the almost 70,000 U.S. troops in the Philippians, who slaughtered hundreds of thousands of Filipino freedom fighters and non-combatants between 1898 and World War II. 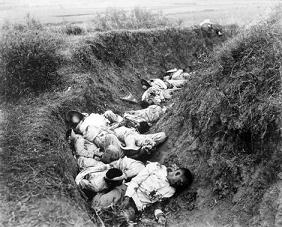 Filipinos killed by US troops before World War II

The New York Times does not review every movie or documentary produced so it is questionable why they would review this lackluster 38-minute documentary about China’s first emperor. Was there another motive behind this review—to remind Americans of the Tiananmen Square incident? After all, let’s not forget anything bad that Communist China does while forgetting worse historical sins committed by American troops and its allies.

See What is the Truth about Tiananmen Square?

This entry was posted on Monday, June 7th, 2010 at 12:00 and is filed under America, China, Chinese history, history, media, politics. You can follow any responses to this entry through the RSS 2.0 feed. You can leave a response, or trackback from your own site.

3 Responses to Propaganda Masquerading as a Movie Review