The Power of Debate in China

“The news triggered a heated debate that was played out all over the Chinese-language media and on the Internet. Eventually, the government backed down, and it’s been left up to industry groups to figure out new guidelines.” Source: Gr-r-r-r! Why I hate China’s e-bikes

This quote from Adrienne Mong, an NBC News Producer, caught my eye. Gasp! Is this evidence from a Western Media source that the people of China have a voice and use it? I hope Adrienne doesn’t lose her job for this slip.

This sounds like America where public debates often have an impact on public policy even if that impact is negative since the majority rules—well, in theory, since in America the majority is often ignored while we constantly hear from “loud” minorities. Take the Tea Bag people, who represent less than 15% of the population, as an example. I wish they’d shut up.

Every time I’ve been in China, we walk, take taxis or use the subways.  We don’t bike, but I have admired the electric bikes.  This is the first I’ve heard of an e-bike without lights. 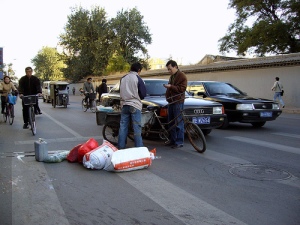 bicycle and an Audi 80 collide in China

Considering that America loses about 45,000 people a year to highway deaths and, according to Adrienne Mong, China loses twice that with almost five times the population, I’m surprised the numbers for road kill in China are not higher. Many of the drivers in China are crazy. The busy streets look more like an NFL game in the Super Bowl. I’ve often observed that red lights are ignored and crossing any street and sometimes even using sidewalks is risky.

Also see, Where Did All that Pollution Come From?

This entry was posted on Thursday, April 29th, 2010 at 12:00 and is filed under America, China, Chinese Culture, environment, government, media, politics. You can follow any responses to this entry through the RSS 2.0 feed. You can leave a response, or trackback from your own site.

2 Responses to The Power of Debate in China