A Story about Corruption

National Library Week was April 11 – 17.  Friday, I attended the Golden Leaves event at Cal Poly Pomona’s University Library. Afterwards, I joined a conversation about China, and one American Caucasian mentioned the corruption in China and how flawed their legal system was. He was adamant that China had to change and become more democratic like Taiwan was. He also said there were a lot of angry people in China who wanted change.

However, there are two sides to every coin, and there are times when I’m slow to respond.  I have to think about the issue first. Now, I’m ready.

“According to experts, the actual amount investors gave to (Bernard) Madoff over the years is probably closer to $20 billion. But even that outlandish sum will never be found; it was chipped away year after year after year. That, after all, is the definition of a Ponzi scheme: Most of the cash put up by new investors went to pay the old ones.” Source: CNN.com 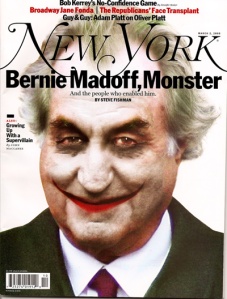 “Enron was the largest company ever to go bankrupt in U.S. history.… Enron gave over $5 million to campaigns since 1998. Out of the 248 elected officials investigating Enron’s collapse, 212 received campaign contributions from Enron or its accounting firm, Arthur Andersen.

“Enron donated money to George W. Bush’s campaign and Kenneth Lay was a close friend. This week, a congressional watchdog agency announced that it will sue Vice President Cheney to get records of meetings he had with Enron officials. The agency is investigating whether the company was able to influence the energy policies of the United States government.” Source: pbs.org

“WASHINGTON—The Securities and Exchange Commission suspected Texas financier R. Allen Stanford of running a Ponzi scheme as early as 1997 but took more than a decade to pursue him seriously, according to a report further tarring the agency that missed Bernard Madoff’s huge fraud.… Mr. Stanford was indicted last June and accused of orchestrating a Ponzi scheme that swindled investors out of $7 billion.

“The report by the SEC’s inspector general says SEC examiners concluded four times between 1997 and 2004 that Mr. Stanford’s businesses were fraudulent, but each time decided not to go further. It singles out the former head of the SEC’s enforcement office in Fort Worth, Texas, accusing him of repeatedly quashing Stanford probes and then trying to represent Mr. Stanford as a lawyer in private practice.” Source: Wall Street Journal

“The US sub-prime mortgage crisis has led to plunging property prices, a slowdown in the US economy, and billions in losses by banks. It stems from a fundamental change in the way mortgages are funded.”

“On Thursday, Sept. 18, 2008, the astonished leadership of the U.S. Congress was told in a private session by the chairman of the Federal Reserve that the American economy was in grave danger of a complete meltdown within a matter of days. “There was literally a pause in that room where the oxygen left,” says Sen. Christopher Dodd (D-Conn.)

“FRONTLINE then chronicles the disaster that followed. Within 24 hours, the stock market crashed, and credit markets around the world froze. “We’re no longer talking about mortgages,” says economist Gertler. “We’re talking about car loans, loans to small businesses, commercial paper borrowing by large banks. This is like a disease spreading.”
Sources:  BBC and PBS-Frontline

“Likewise, 83.5 percent of Chinese thought their country is run for all the people, rather than for a few big interest groups, whereas only 36.7 percent of Americans thought the same of their country. With this relatively higher trust, China’s government and enterprises are better able to enact and implement strict policies that promote saving and growth.” Source: The Economist’s View

I wonder if the corruption in China will ever threaten the world’s economies? I’ll let China speak for itself, Economists defend China’s high savings rate.

This entry was posted on Friday, April 23rd, 2010 at 08:00 and is filed under America, China, crime, economy, government, politics. You can follow any responses to this entry through the RSS 2.0 feed. You can leave a response, or trackback from your own site.