When I was still teaching, one of the most common questions parents asked was, “What can we do to get him to read and do his homework? He won’t listen.” I said, “Turn off the television and any computer linked to the Internet. Learn to say no and mean it.” Most never followed that advice and I seldom saw improvement in that child’s study habits or grades. 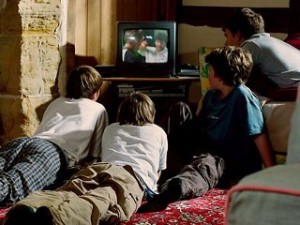 The latest research, published in the April issue of the journal Pediatrics, shows that having a bedroom television not only leads to more TV viewing, but also results in less time spent with the family, less time exercising, lower fruit and vegetable intake, more sweetened beverage consumption, and in lower grades. Source: Onslow/Allison

The scary thing is that many American parents don’t know how bad a job they are doing raising their kids. The average child watches several hours of television daily and spends several more text messaging or camping on Websites like YouTube. That same child goes to bed late and gets up early to go to school. Most American teens aren’t getting the nine hours of sleep necessary for their mental and physical growth and sleep is important.

In addition, more than forty percent of American children are latchkey kids. At the end of the school day, latchkey kids go home to an empty house because both parents are working to pay for that ten thousand dollar credit-card debt the average American family owes.

This entry was posted on Wednesday, April 14th, 2010 at 08:00 and is filed under America, American culture, China, Chinese Culture, education, media. You can follow any responses to this entry through the RSS 2.0 feed. You can leave a response, or trackback from your own site.

One Response to Where are the Parents – Part 2/4