China may be the only ancient culture that survived the spread of Islam and Christianity and managed to keep its unique identity. The following passage comes from My Splendid Concubine’s 3rd edition. My first novel has picked up fifteen literary awards. In the novel, Guan-jiah is Robert Hart’s servant.

“Guan-jiah,” Robert said, “before I came to China I read The Travels of Marco Polo. Do you know who he was?”

“He came to China from Europe more than six hundred years ago and served under Kublai Khan during the Yuan Dynasty. Polo wrote that Hangzhou was the finest and noblest city in the world.”

“Hangzhou was the capital of the Southern Sung Dynasty, Master,” Guan-jiah said. “I’ve heard it is beautiful. Sung philosophy says that we have the power in our minds to overcome our emotions.”

“Marco Polo believed it was God’s will that he came back from China so others in the West might know what he’d seen.” Robert turned to his servant, who was the last in line. “Do you believe in this Sung philosophy, Guan-jiah?” 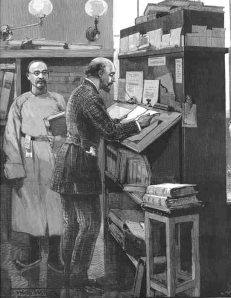 “The Sung said that if you know yourself and others, you would be able to adjust to the most unfavorable circumstances and prevail over them.”

“That’s admirable, Guan-jiah. You never mentioned you were a scholar. If the Sung Dynasty was that wise, I want to see Hangzhou one day.”

“I am no scholar, Master, but I must believe in the Sung philosophy to survive. I have read and contemplated much literature. However, I am like a peasant and have never mastered calligraphy. It is a skill that has eluded me.”

“How old were you when you studied this philosophy?”

“I was eleven, Master, two years after I was sent to Peking.”

Source: From Chapter 4 of My Splendid Concubine

And Discover The Influence of Confucius

This entry was posted on Tuesday, July 23rd, 2013 at 05:00 and is filed under Buddhism, China, Chinese Culture, Chinese history, Confucianism, cultural differences, Lloyd Lofthouse, My Splendid Concubine, Taoism. You can follow any responses to this entry through the RSS 2.0 feed. You can leave a response, or trackback from your own site.