Regardless of the evidence that proves the Tibetan government in exile is not telling the truth about Tibet being part of China for centuries before declaring independence in 1913 (when the Ch’ing Dynasty was collapsing and the British Empire urged Tibet to break free for political reasons), the Dalai Lama and his Prime Minister represents less than 100,000 Tibetans outside China. 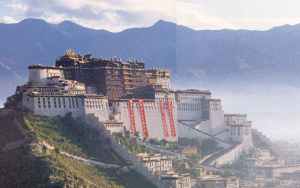 I also wonder if that 1% in exile were the Tibetan landowners. Did they leave most of the serfs/slaves behind when they fled?

Maybe the Tibetan separatists/rebels (whatever term you like), with help from the CIA, should join the American Tea Bagger movement and gain the support of Glenn Beck and Rush Limbaugh. They could sit around the campfire during protests and sing hymns about marching into battle to take back the wealth.

This entry was posted on Tuesday, April 13th, 2010 at 08:00 and is filed under Buddhism, Buddhist, China, Chinese history, Communism, history, media, politics, religion, Tibet. You can follow any responses to this entry through the RSS 2.0 feed. You can leave a response, or trackback from your own site.

One Response to Tibet Inside China – 5/5